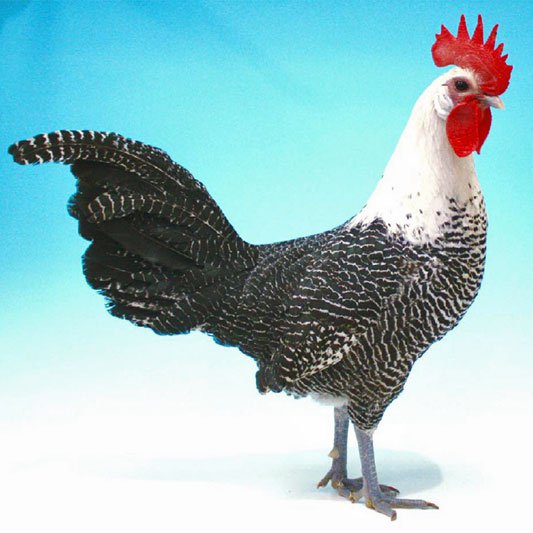 The Campine (pronounced kam-peen) originated in the northern part of Belgium around Antwerp. It is closely related to the Brakel (also Belgium), Chaamse Hoen (The Netherlands) and Hergines fowl (northern France). Most Campine males bred in Belgium before 1900 had normal cock feathering, although hen-feathered males appeared occasionally. The difference between Brakels and Campines then was in build and weight, the Campines being slimmer.

British poultry expert Edward Brown wrote about Campines in 1897, soon leading to the first importation by Thomas Braken of Lancaster. A Campine Club was formed here about 1900. The club members had heard about the hen-feathered males, but did not have any at first. They were keen to adopt them as their Standard male to avoid the complications of double mating experienced by breeders of pencilled Hamburghs. The first henfeathered male in the UK, a silver from eggs imported from Belgium, won at several shows in 1904. Sons of this bird were spread around club members, some of whom crossed them with gold females to produce hen-feathered gold males by 1911. Rosecombed Campines briefly appeared in the 1920s and 1930s. Campine bantams have appeared from time to time since the 1950s.