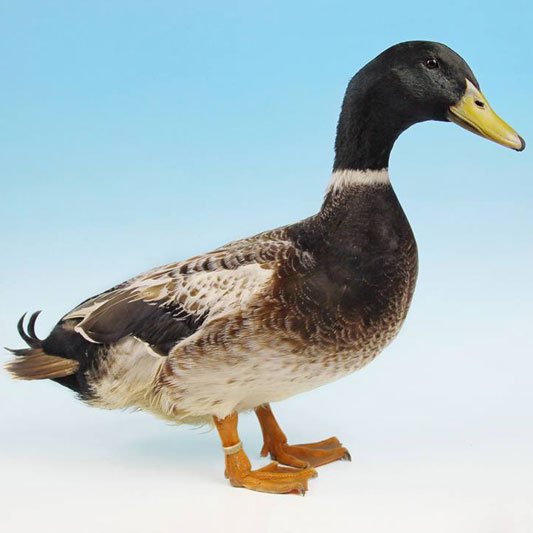 Originally bred by Group Captain Leslie Bonnet at the end of the Second World War, the breed owes its existence to a chance production of two mutations (‘sports’) from a flock of khaki Campbells in 1949. These ‘Honey Campbells’ were renamed ‘Welsh Harlequins’ when the Bonnet family moved to Wales.

The Harlequins were saved from virtual extinction after the late 1960s by Edward Grayson in Lancashire. He had retained birds from the original Bonnet strain, bred these back to khaki Campbells and eventually stabilised the colour form. This was possible simply because the Harlequin is genetically almost identical to the khaki Campbell. It possesses two recessive genes, which F.M. Lancaster established as harlequin phase. Both khaki Campbell and Welsh Harlequin have dusky mallard genes and sex-linked, brown dilution genes, hence the bronze rather than blue specula. Modern examples of the Welsh Harlequin, however, tend to have bright olive bills, compared with the blue-green of the Campbell and a proportion of the early Harlequins.