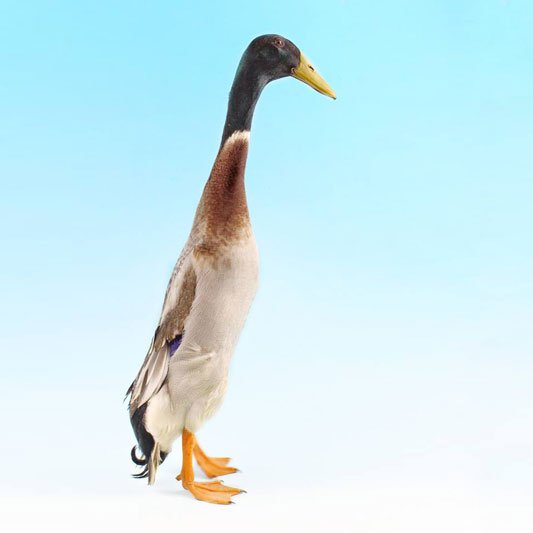 There are reports of ‘Penguin’ ducks being imported into Britain as early as 1835. These ducks brought with them brown dilution and also dusky mallard genes, as well as their upright stance and prolific egg-laying capability, as witnessed by Alfred Wallace in Malaya. The term ‘India Runner’ was largely coined by John Donald in about 1890, when he described similar birds imported also some time in the 1830s. These included all-fawns, whites and pied pattern ducks, the last being the basis of the Poultry Club Standard publication of 1901. The Indian Runner Duck Club’s Standard of 1907 described only the fawn-and-white; that of 1913 recognised also the white and the whole fawn.

Black Runners were developed from an early white import that also had a certain amount of black in its plumage. Crossed with a Black East Indian, it allowed the development of both black and chocolate Runners standardised by the Poultry Club in 1930 and the later Cumberland blue Indian Runner, all three of which have extended black genes.

Trout Runners were the next to be standardised. They have mallard (M+) genes instead of the more common dusky mallard (md). When heterozygous for blue dilution (Bl/bl+), trouts become blue trouts. When homozygous for blue (Bl/Bl) they are apricot trouts (Blaugelb in German). A similar use of blue dilution turns the fawn-and-white (pencilled) into the American fawn-and-white.