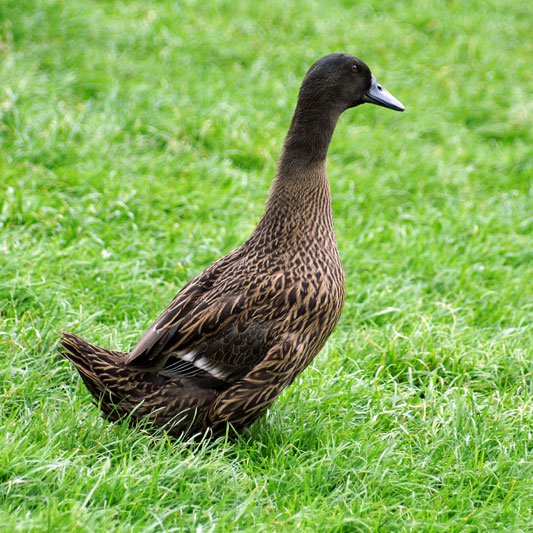 One of the first, and certainly the most successful, of the utility breeds designed in the twentieth century from the Indian Runner, the khaki Campbell largely took over as the top egg-laying duck. The colour of farmyard mud, from which it gets the first part of its name, the khaki Campbell proved to be exceedingly agile, very fertile and extremely prolific. It too has spawned many variants: the white Campbell, the dark Campbell, the Welsh Harlequin (a simple mutation of the original khaki), the Abacot Ranger (a cross back to the Runner) and the Whaylesbury hybrid (Harlequin and Aylesbury).

‘This breed’, writes Captain R.A. Long (1926), ‘was produced by mating a Rouen drake with a Fawn and White Runner duck, some Wild Duck blood being added later. Mrs Campbell writes of her ducks that they were meant for utility layers – not show birds – but that since some people wished to show them (and the birds must be bred to a definite type), she drew up a standard of what she would like them best to be in plumage.’

Mrs Campbell’s original Campbell ducks were not khaki at all. They quite closely resembled Abacot Rangers. It was not until about 1901 when she tried to produce buffcoloured birds, and failed, that the khaki variety emerged.

The white variety was developed by Captain F.S. Pardoe in 1924 and standardised in 1954. It was hailed as having identical utility properties to the khaki but with more attractive selling appearance, at least for the table. The white plumage is the result of a recessive gene that hides other colours. The white Campbell also has a gene that makes the bill appear yellow rather than pink.

The dark Campbell, first standardised also in 1954, was the product of attempts to breed autosexing ducks. Mr H.R.S. Humphreys of Devon is credited with creating this variety in the 3 September 1943 edition of Poultry World. The element of sex linkage is caused by a lack of the brown dilution normally in the khaki. Because this is a sexlinked gene, it is possible to cross a khaki drake with a dark Campbell female to produce khaki female ducklings and dark-looking male ones, thus allowing breeders to cull unwanted males in their day-old fluff. Essentially the dark Campbell has the same colour form as the dusky mallard Call. Quite simply it is a khaki without any brown dilution.