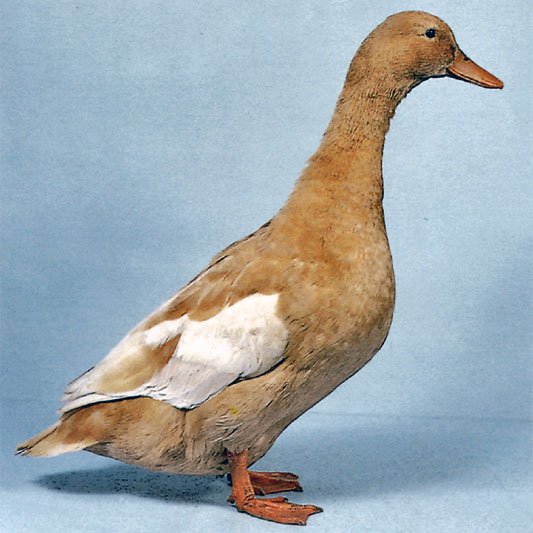 The Orpington Ducks were developed by William Cook of Kent, who also bred Orpington chickens in the late nineteenth century. The buff and blue versions are likely to have emerged some time after 1894, and were being advertised for sale in 1898. These ducks were believed to be the result of cross-breeding Indian Runners to Aylesburys, Rouens and Cayugas. The buffs were standardised in 1910, followed by the blue variety in 1926. Black, white and chocolate Orpingtons were also developed but these were not standardised.

The Standard buff Orpington is an attractive but unstable colour form. Standard birds are impure for blue dilution and produce three colour forms, the first of which is the Standard:

Buff: Intermediate head colour in the males (seal brown), a dark grey-brown colour. There is very slight indication of blue on the rump, and the females, like the males, have an overall even buff body colour with little evidence of pencilling.

Blond: Pale buff with a light grey-brown head (in the case of the drake) and possibly more blue on the rump. The females are paler than the buffs and there is even less chance of pencilling.

Brown: Light khaki pencilled plumage on the females; brown heads and rumps on the males; no evidence of blue at all.