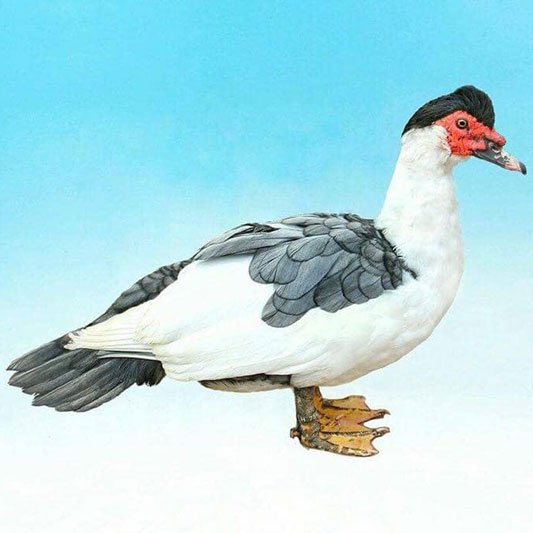 The wild Muscovy (Cairina moschata) is a native of South and Central America, where it was being domesticated long before Columbus arrived in 1492. (White ones were found on Guadeloupe, by Diego Alvarez Chanca in 1494.) It is allocated to a subgroup of perching ducks known as ‘the greater wood ducks’, which it shares with the white-winged wood duck and Hartlaub’s duck. These are heavy-bodied birds with relatively short legs that give them a horizontal carriage. They have broad wings with bony knobs at the carpal joints and the males show a slight swelling of the forehead during the breeding season. The wild Muscovies are mainly black in plumage with white patches on the wing covert area. These vary, but usually develop with age. This is the basic wild pattern. Other patterns have been developed under domestication, including the magpie pattern and the white-headed magpie pattern. Three other characteristics are readily apparent: Muscovies have an erectile forecrown crest, wart-like ‘caruncles’ that develop with age, especially in the case of the males, and webbed feet (with strong claws) equally suited to perching as to swimming. The size has increased under domestication. A powerful bird requiring careful handling.