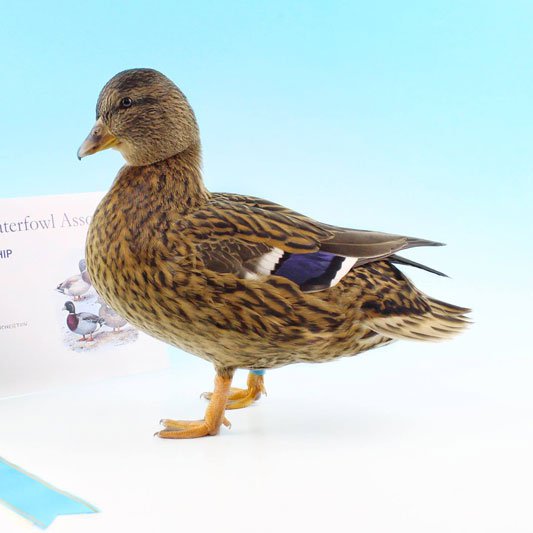 While known as Call Ducks nowadays they have been referred to as Decoys or Coys in the past. Francis Willughby, who toured The Netherlands, Germany, Switzerland and Italy between 1663 and 1666, observed how wildfowlers in The Netherlands fitted ponds with channels and nets prior to stocking them with Coy Ducks to entice and entrap wildfowl. He noticed that some Coy Ducks were free winged, but others were pinioned. A painting by Melchior d’Hondecoeter (1636–1695), featuring what appears to be well-grown Call ducklings in the foreground, seems to back this evidence that they existed in The Netherlands in the seventeenth century.

Trapping wildfowl went on in Britain also, with wildfowlers deploying tame or semitame ducks to entice their wild relatives. Reverend Edmund Saul Dixon MA revealed in his book Ornamental and Domestic Poultry, written in 1848, that a much smaller race of white ducks had been imported from The Netherlands and that their chief merit, indicated by the title Call Duck, consisted in their incessant loquacity. He went on to state that the management of decoys was as well understood in Norfolk as anywhere and that the trained Decoy Ducks there resembled the wild Mallard. While these wild coloured traitors aroused no suspicion the imported conspicuous Dutchmen excited fatal attention and curiosity. The white Call Ducks had a yellow-orange bill unlike the Aylesbury’s, which was flesh coloured. Harrison Weir’s Our Poultry, published in 1902, in quoting from Johnson’s Dictionary: ‘To decoy, v.a. (from Koey, Dutch, a cage), to entrap, to draw into’, aptly described why these diminutive ducks were employed.

When the first Standard of Excellence in Exhibition Poultry was compiled in 1865 two colour varieties of Calls (known as Decoy at that time) were standardised – the white and the grey. (The latter becoming known as the ‘brown’ before being termed ‘Mallard’ at the present time.)

By the mid-1880s, Mandarins and Carolinas had become more popular with exhibitors and Calls were relegated to just the odd exhibit or two being shown in Ornamental duck or drake classes. This state of affairs lasted for over a century until their popularity really took off and more than 300 Call Ducks could be seen at larger shows. This popularity has continued and the Club Show, in current times, can attract in excess of 500 entries. From 1971 onwards, additional colour varieties have been standardised.