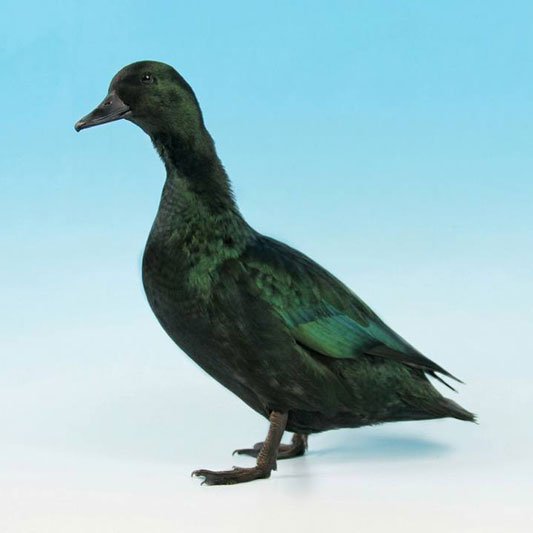 First standardised in Britain in 1865, the Black East Indian Duck shares its colour with the North American Cayuga. This bantam duck was alleged to have been imported to Britain by the Earl of Derby in about 1850. However, evidence suggests that it had been already in the possession of the Zoological Society of London (ZSL) since 1831, the same year that the 13th Earl of Derby was elected President of the ZSL. At this time it was known as the ‘Buenos Ayres’ duck, but there seems to be no evidence that South America or the East Indies were the places of origin. It has been known as ‘Labrador’, ‘Brazilian’, ‘Buenos Aires’ and eventually ‘Black East Indie’, the first being perhaps the most appropriate geographically.

There is speculation that the black gene may have arrived via a close relative of the northern mallard, the American black duck (Anas rubripes). This is the bold assertion of early historians of the Cayuga, and it seems equally applicable to the Black East Indian. The drakes tend to retain their black plumage but the females develop patches of white as they get older. Impure black birds can show elements of brown pencilling, especially under the wings and throat.