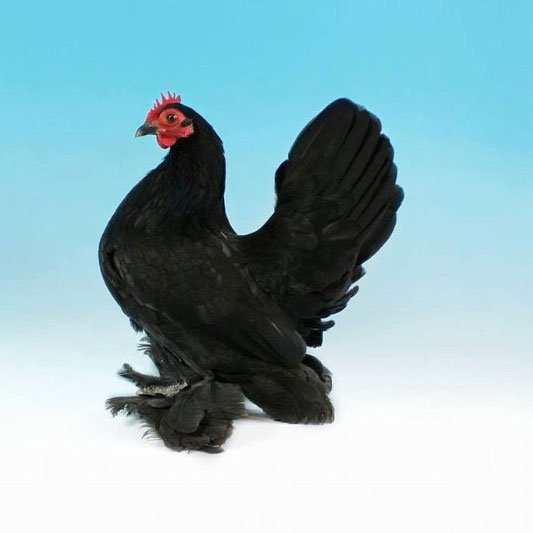 These have a complex history which spreads over Great Britain, Germany (where they are named Federfußige Zwerghühner), The Netherlands (where they are named Sabel-poot) and Belgium (where they were crossed with Barbu d’Anvers to make Barbu d’Uccles). Although Black and White Booted bantams are believed to have been developed in the UK, all colours of Booteds have been rare here since they were overshadowed by Barbu d’Uccles when they were first imported in 1911. Fortunately, towards the late 1990s they were much more popular in Germany and The Netherlands, where large numbers in a wide range of colour varieties could be seen at the major shows. There has been a revival of interest in the UK since then, and, in 2014, the Booted Bantam Society UK was formed by an interested group of breeders from within the Rare Poultry Society. Booteds have tighter neck feathering than Barbu d’Uccles, with no beard or neck boule. Some young Booteds can seem too tall and narrow, but they usually become stocky, compact and full feathered when fully mature. As True Bantams, Booteds must be small, as befits their classification, and avoid the tendency towards large specimens sometimes seen at shows.