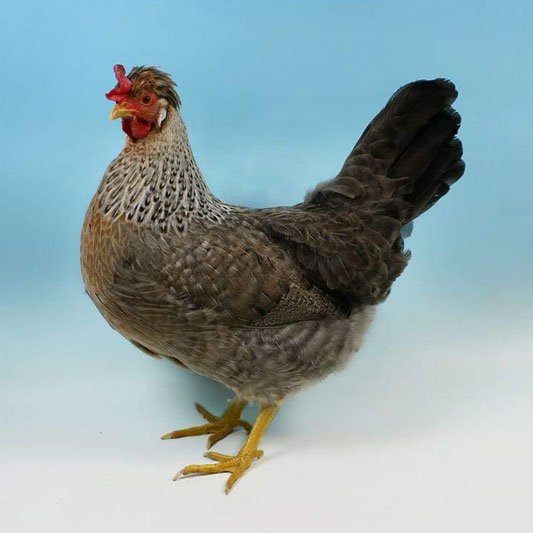 These were one of the first autosexing breeds to be created at Cambridge, being based on the Leghorn as the name suggests. The Gold and Silver Legbars were standardised in the mid-1940s and early 1950s, respectively. These were based on utility strains of brown Leghorns which had managed to survive throughout the Second World War. Although relatively popular earlier on, both varieties of Legbar were covered by the Rare Poultry Society until recently, where the Autosexing Breeds Association reformed with only the Gold being seen occasionally. Cream Legbars have crests, varying plumage to the Legbar, and lay blue eggs. Interestingly, this breed was produced involuntarily. It was Mr Pease, attempting to improve on the Gold Legbars, who crossed them with White Leghorns. Because of the dominant white of the Leghorns, other colours were transferred to the offspring which, when mated again, led to ‘interestingly cream-coloured’ chicks. Evidently, these first Cream Legbars were crestless and laid white eggs, with the blue being later incorporated through Araucana crossing. Although not favoured by the markets of the day, Cream Legbars are now benefiting from renewed success through the work of dedicated fanciers.