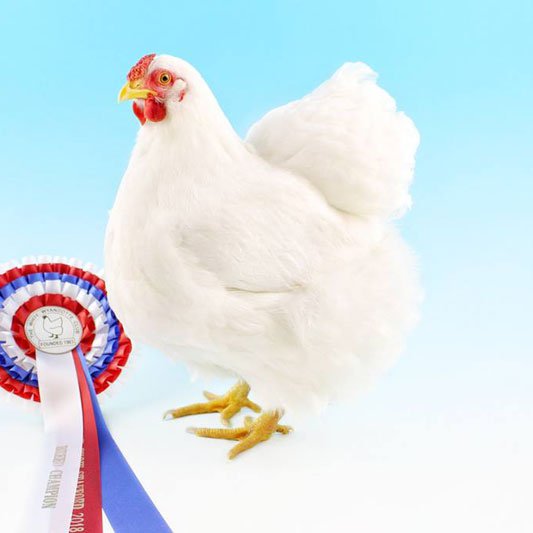 The first variety of the Wyandotte family was the silver laced, originated in America, where it was standardised in 1883. The variety was introduced into England at the time, and our breeders immediately perfected the lacings and open ground colouring. Partridge Cochin and gold spangled Hamburgh males were crossed with the silver females to produce the gold laced variety. The white Wyandotte came as a sport from the silver laced; the buff followed by crossing buff Cochin with the silver laced. In 1896, the partridge variety was introduced from America, the result of blending partridge Cochin and Indian Game blood with that of the gold laced, the variety being perfected for markings in England. It was once called the gold pencilled, and the silver pencilled soon followed from partridge Wyandotte and dark Brahma crossings. Columbians were the result of crossing the white Wyandotte with the barred Rock, and it was the crossing of the gold laced and the white varieties which produced the buff laced and the blue laced, first seen here in 1897. Blacks, blues and barred have been made in different ways in this country. The latest variety to be introduced is the red, created in Lancashire, from the gold laced variety, with selective matings with white Wyandotte, Barnevelder and Rhode Island Red. It is clear that, while the family of the Wyandotte is large, every variety is a made one from various blendings of breeds.