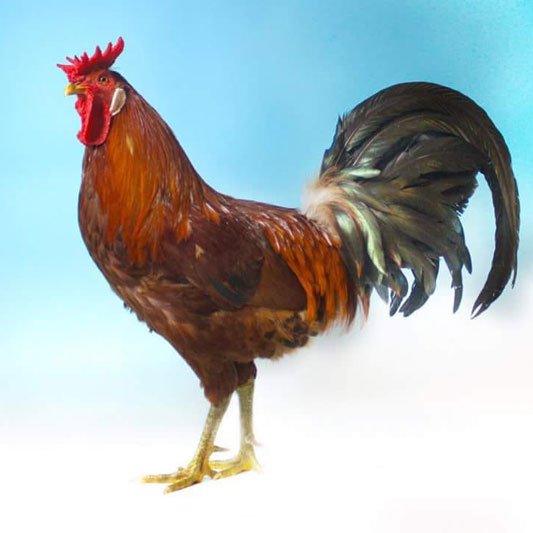 The distinguishing feature of the breed is the cup-shaped comb. This comb variation has been known for centuries – birds with this type of comb are portrayed on paintings in galleries in Rome and Florence, dating back to the sixteenth century. The first specimens were taken to America from Sicily in the 1830s. Today’s stock probably descended from imports and subsequent selection by C.C. Loring of Dedham, Massachusetts, in the 1860s or from eggs imported to America in 1892. In 1907, the breed was widely promoted by the efforts of Mrs James L. Dumaresq, of Easton, Maryland, whose husband had been in the American diplomatic service. She noted ‘the chickens were pretty, tame, and abundant layers’. Specimens were brought to Britain in 1910 and in 1913 by a Mrs Colbeck of West Yorkshire. Soon afterwards a breed club was formed; there followed a brief spell of popularity followed by a decline in interest from the late 1920s. Sicilian Flowerbirds were standardised in 1922 as a distinct breed. The Buttercup in bantam form is a recent creation. Obtaining correct plumage markings on females, well-cupped combs on both sexes and a wholly red ear-lobe are the main difficulties in breeding show quality Buttercups. The American Standard for the breed was changed in the late 1920s in favour of a white earlobe, hence stock imported to Britain in the 1970s from the USA were white lobed.